Asus has been the pioneer in creating good quality laptops in the market. The main reason for Asus getting this much attention from the consumers is their groundbreaking technologies and killer performance. The ROG components and the devices are certainly the power impacts of Asus. ROG stands for the Republic of Gamers. This is pretty clear for you now, right? ROG laptops and other components are fine-tuned and precise for a singular purpose, and that is gaming. In this article we will give a complete guide about Asus rog Zephyrus g15.

Two major companies make processors for computers. They are Intel and AMD. Intel has been the choice for the general consumers as well as power demands. AMD had a bumpy ride throughout its history. But in recent times. They have been striking back with exciting new Ryzen series.
The Ryzen processors are pretty much cost-efficient and powerful at the same time. So, manufacturers have restored faith in the AMD series as well. In the same rhythm, Asus inherited one of their powerful chip in the latest Asus ROG Zephyrus G15 Gaming laptops.

Luckily, thanks to Asus, we got our hands on one of these little beasts. We have been using this bad boy for the past few days. So, I have a sufficient understanding now. That is why I am writing my thoughts and reviews about the brand new Asus ROG Zephyrus G15.

Before moving on to the in-depth review, I would like to clear some doubts about the Ryzen processors. Mostly, I want to break the ice today about the common myths of AMD processors. So, I expect you guys to stick with us the whole time.

Ryzen 7 series is the newest integrated mobile SOCs for the laptops. This Octa-Core processor comes with a massive boost in performance. But the main issue is that we do not know what it is capable of. It would be better to compare with the much more familiar competitor in the market, the Intel Core i7 9100UI.

The 9th Generation Intel Core i7 Processor is a king in the gaming aspects, no doubt. But it will cost you a significant amount of fortune and money. The Ryzen 4800HS lacks some checkpoints, but sacrificing some of the minor aspects for a substantial price drop seems worth the hustle. On the other hand, the significant aspects of being too much on bulk gaming require more juice in processing power. Despite some minor drawbacks, the Ryzen 4800HS can be a lifesaver in the majority of the scenarios.

So, AMD is kicking the dirt pretty hard when it comes to price dropping and boosting power and performance. But why did we discuss all of these? Because the laptop which we are going to review today inherits the same processor.

Now, we have a clear idea about the processor and its capabilities. So, we will be moving on to the full review of the Asus ROG Zephyrus G15. I do expect the readers to stick with us throughout the whole discussion. If you are into gaming, then this is an excellent article for you as this laptop has been making a lot of promises and demands at a much lower price point. 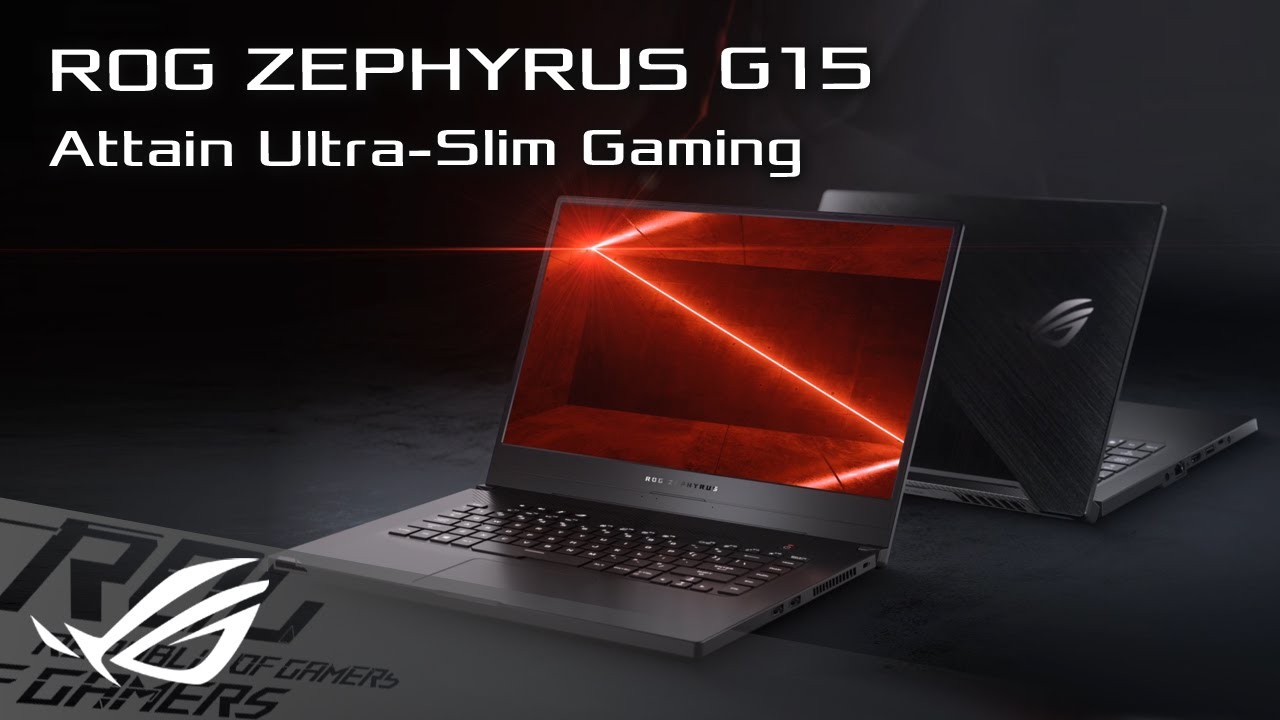 The Asus ROG Zephyrus G15 has been the savior of the Ryzen laptops in the time being. In recent times, Ryzen laptops are missing those magic touches here and there, which has been pretty hard for the consumers. But this laptop comes with a better solution overall. This is why. The Asus ROG Zephyrus G15 has been attracting a bunch of eyeballs after its launch.

But there are some of the drawbacks still hovering in the air. First of all, this is an entry-level gaming laptop. It should be pretty clear that you cannot compare this with other flagship end laptops like the TUF series. But it can crack some fireworks here and there as well.

READ  How to Convert or Create a PDF: What You Need to Know

On the contrary, this laptop comes with a Ryzen 7 Series processor and a 32 Gigs of RAM. The storage is of 512 GB SSD. The graphics processing unit has been not the top of the line, but it is relatively robust. All of these will be discussed in detail in the following segments.

Thanks again to the Asus boys for providing us with a retail stock. So, we are going to give you a fully maximized review in real-time.

The significant aspects of any laptops on which we will be conducting an impression are as follows:

These categories will give us a crystal clear understanding of the laptop and its capability. First of all, we will be looking into the Design of the Asus ROG Zephyrus G15.

Usually, Laptops are meant to be on the go computing device. It is mainly purchased form it’s portability rather than its performance. But gaming laptops can be just the opposite. These laptops are usually bulky and much more massive.

But there are some reasons for it. This laptop does carry a lot of additional equipment that can bear the load of the performance requirement. That is why this looks bulkier than usual. On the other hand, the main aspects of the design are durability and toughness.

These performance components are often delicate and fragile. So, adequate quality protection is always on the cards. That is why metal framing on the lid, good frame support is required. On the other hand, the cooling system is yet another significant aspect of gaming laptops. As the gaming components are operational, they produce a lot of heat, this is needed to be treated within the time limit, and otherwise, the performance benchmark will drop at an alarming rate.

Thus these laptops need better and bigger fan support and good quality air vents. That is another reason for these laptops being bulky and heavy. The dimension of the latest Asus ROG Zephyrus G15 is 14.17 inches in length. The width of the computer is around 9.92 inches, and the thickness is about 0.79 inches. This laptop weighs approximately 2.

These are the necessary dimensions. As you can see, they are pretty hefty and bulky. But I have mentioned the reasons for those. The keyboard is backlit, and there is a cool ROG logo that glows on the front lid when the laptop is operational. Other than that, the design aspects remain the same as usual.

Now, we will be moving on to the display unit of the all-new Asus ROG Zephyrus G15.

Now, we will be moving on to the performance unit of the Asus ROG Zephyrus G15. This is perhaps the most anticipated unit of all time.

First of all, we will be discussing some of the critical features of the SOC. This laptop runs in the latest Windows 10. The processor is the Ryzen 7 4800HS.

The Ryzen 7 is the latest incarnation in the AMD Ryzen family. AMD has been working hard night and day to recapture the lost fame. And I must tell you. The results are beyond expectations. The Ryzen Processors are making a significant impact on the market, and people are starting to buy it as well.

The Asus ROG Zephyrus G17 comes with the latest Ryzen 7 4800HS. This is a mobile integrated Octa-Core processor, which can make a massive power boost. It is sometimes comparable to the Intel Core i7 Series. But there are some limitations. But they are nominal. The most significant price point of the processor is that it can be found at a much lesser price than Core i7. So, the minor drawbacks are worth forgiving.

The Asus ROG Zephyrus G15 comes with a total of 32 GB of RAM. The 16 GB Soldered and 16 GB DDIM is the right combination whatsoever. The version is DDR4. But LDDR4x RAMs should have been the better option. But, as I said, this is an entry-level gaming laptop. That might prove to be a volatile point for gamers. But, it is a severe change, which can be considered.

Now, we will be looking into the storage of the Asus ROG Zephyrus G15.

The Asus ROG Zephyrus G15 comes with a 512 GB M.2 80 mm PCIe x4 – Micron 2200 MTFDHBA1T0TCK SSD card. As I have been saying all the time, M.2 PCIe SSDs are the Bolt of the SSD world. There is good news as well for the consumers. First of all, the 512 GB SSD is pretty good. But if you want, you can quickly crank up the specs with an additional SSD as well because there is an extra M.2 port on the laptop.

Now, moving on to the GPU of the laptop.

The Graphics Processing Unit is basically the power generator of a computer when you are doing any significant task that requires a fair amount of video rendering. This might be the case. Or, in some cases, it elevates the computer performance in almost all the sectors. Especially in gaming performances, the GPU is a must in the business. Because gaming requires a fair amount of graphics-intensive tasks and rendering, on the other hand, multitasking is a viable option if the GPU is strong.

The dedicated GPU is Nvidia GeForce GTX 1660Ti Max-Q. The 1660Ti is a pretty powerful graphics processor. It can push the laptop pretty well. But there are more powerful ones in the market. So, this is a bit left behind. But having said that. Max-Q-ing a GPU can elevate the performance up to a fair amount of milestones. This GPU is maxed out to a 60W power consumption. It is a 6 GB GDDR6 (with Nvidia 445.87) VRAM graphics processor.

Overall, the GPU combination is a good one for the gamers. Yes, there are better ones. But they cost more, which makes this worth it. Now, we will be looking into some of the significant aspects of the performance of the Asus ROG Zephyrus G15.

Gaming laptops are not that good in power backups. So, the durability in power management is pretty must throw out of the park. The battery comes with a 76 Wh with a 180 W power adapter. The type C port can be used as a charger port as well with a 65 W charger.

The keyboard is white backlit. The speakers are bottom-firing stereo speakers. The ports are as usual. There is no webcam in the Asus ROG Zephyrus G15.

So, as far as my experience and the analysis of the Asus ROG Zephyrus G15, I have come to the point that it is a good gaming laptop. Despite some drawbacks, it is a good one, and I do recommend it to you guys.

The first thing you will probably notice in the title is the term ‘Chromebook.’ The name kind of sounds familiar,...