Home games Exciting Mobile Games That Are on the Horizon

We are truly living in the magnificent era of mobile gaming, and the fantastic news is that the booming industry shows no signs of slowing down. Yup, we’ve come on leaps and bounds from the days when if you wanted your mobile to entertain you, you were stuck playing a rudimentary version of Tetris on a pale green background. Nowadays the games can often be bright and colourful, completely engaging and brilliantly designed. – Exciting Mobile Games

Sometimes it can be difficult to keep track of all the games out there, and with so many intriguing options available, many titles can pass you right by. Well, thankfully, we’re here to gift you a heads up, and guide you towards several exciting mobile games whose releases are on the horizon. These will mainly be single player titles, so make sure to read up on the ten best mobile games to play with friends, if you’re after multiplayer adventures.

Soon even your sleep won’t be safe from Pokémon. Whilst we’ve made that sound rather ominous, fans of the Nintendo franchise will be ecstatic to hear that there’s a new Pokémon title coming out on mobile in the foreseeable future. In the same way that 2016’s Pokémon Go revolutionised mobile gaming by making use of a device’s GPS, to allow users to enter an augmented reality, and turned walking into entertainment, Pokémon sleep aims to do the same for when players get their shut-eye.

Whilst the exact details of how this will be achieved haven’t been fully released to the public yet, Nintendo seem convinced that it will make users think more about their sleeping habits, and perhaps turn an activity that a lot of youngsters dread, into one that they can’t wait for. Parents across the globe will be counting down the seconds until its released then, we’re sure.

The charming, yet deadly, Lara Croft, has been a mainstay of video games since the mid-nineties, when she first arrived on the original PlayStation. Her knack for battling wild animals with twin pistols, backflipping her way across exotic locations, all in an epic search for mystical artefacts, made her a real joy for gamers to take control of. Fortunately, that’s still the case thirty years on, and so we’re massively looking forward to Tomb Raider Reloaded.

Hopefully arriving in the next few months, this action-adventure game will be a real homage to the earlier entries in the Tomb Raider series, meaning that there will be interesting puzzles to solve, stimulating scenery to explore, exhilarating shootouts with enemies, and much hidden treasure to find.

The game, developed by Square Enix Ltd, will add to the huge library of games that Lara Croft has appeared in. There’s a massive library of titles for fans to work their way through, including games on many different consoles, and even virtual slots, like the one by Microgaming available over on Vegas Slots Online.

Their website delivers the best gambling experience for many different countries, such as New Zealand, where you can easily access all the top new online casinos available for 2022. Each casino is only selected after their gambling experts have successfully given it the green light, meaning that they’ll be safe to use, offer the most fun games, and have hundreds of virtual slots available. On top of that, there’s also a crazy amount of brilliant sign-up offers available, making you a winner from the get go. 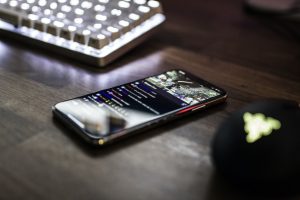 This triple threat of gaming nostalgia was supposed to be released in the first half of 2022, but due to technical problems, it has apparently been set back until either later this year, or perhaps even 2023. This will be a huge blow for the many Grand Theft Auto aficionados, who can’t wait to re-play some of the greatest open-world games ever made, but this time on their mobiles.

This massive delay might have something to do with the utter disaster that was the release of the games onto consoles not long ago, with some severely dissatisfied critics suggesting that GTA: The Trilogy – Definitive Edition is the worst thing developers Rockstar had ever done. However, we’re hoping that the renowned gaming company will get their act together and serve up an amazing mobile game soon, so we can capture the insanely good Grand Theft Auto 3, Grand Theft Auto: Vice City, and Grand Theft Auto; San Andreas, which will all be playable in the palms of our hand.

Will Anthem be cross-platform? Here’s what we know so far

How to make money from video games

Is Gang Beasts Cross Platform in 2022