Motorola was going through a tough time sustaining in the market. The tech company was in its last breath when Lenovo came in as a savior and brought Moto into the new light. But as we progress, the smartphone market has become one of the most evolving markets. Brands are taking over each other on a daily basis, and people are shifting phones like regular apparel. Compare Moto X4 and Moto G6.

In this vastly competitive market, the last thing you would like to have YOURSELF as your bloody rival. Yes, you read that right. Companies like Motorola, Samsung, Vivo, Oppo, Xiaomi are launching phones after phones in the market. Slowly the phones end up as competitions for each other.

Such rivals in the Moto closet is the Moto X4 and the Moto G6. Moto X4 is the transition phone range between the G series and the flagship Z series. On the other hand, Moto G6 is one of the proud edition of the G family.

In today’s article, we will be showcasing the two proud sons of Moto; the Moto X4 and the Moto G6.

As you all know, we will be going through some important aspects of the phone, which will be giving us the required information so that we can have a better understanding of the product and its performance. The aspects are as follows: 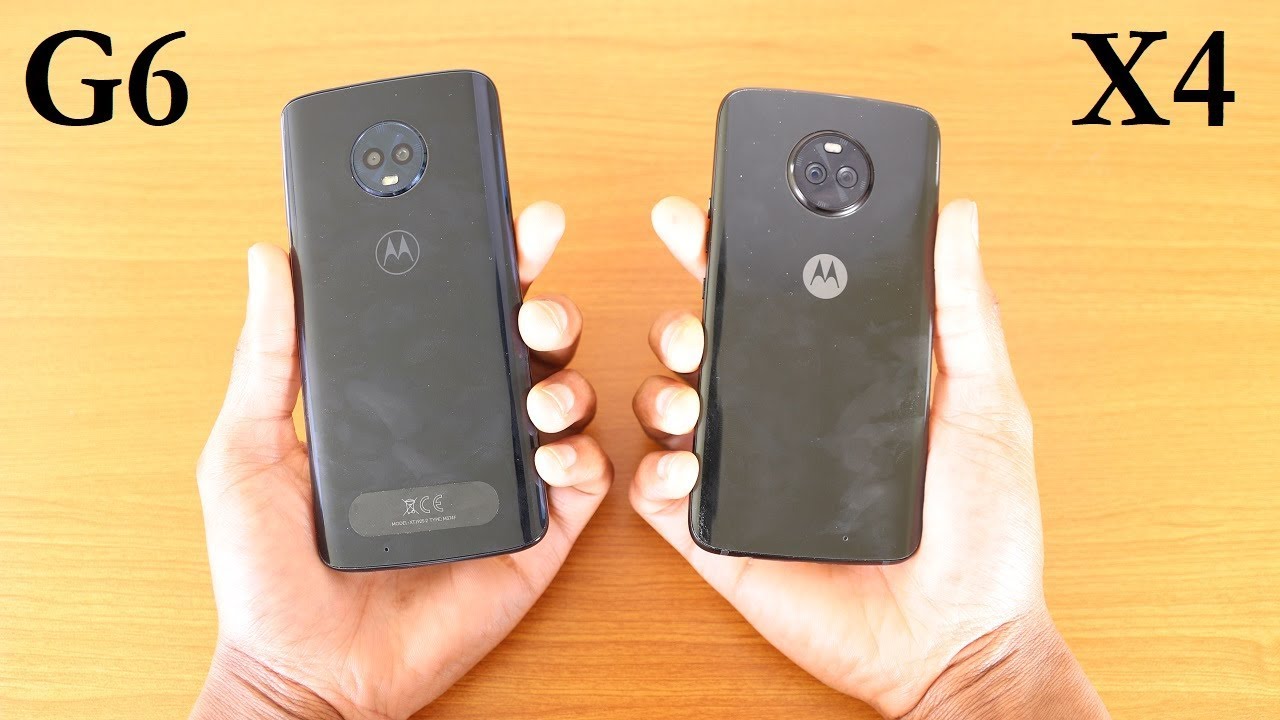 The Moto X4 is made with metal and glass finish. The frame is made out of high-grade aluminum, and the rest of the front and the back are furnished with glass. The front side, which is, of course, the screen, is protected with the Corning Gorilla Glass 3, and the glass back is also protected with that same unspecified Gorilla Glass. The Metal finish and the glass back compliment the phone with a very sexy look ad is, in fact, a phone to show off in your friend and family circle. The phone has a very stud weight balance as it is weighted around a pretty comfortable 163 grams.

The dimension of the phone is pretty normal.

The measurements are 5.84 inches in length, 2.89 inches in width, and 0.31 inches in the breadth. So as we speak, the Moto X4 is in the ideal size of a smartphone and is very comfortable to have a solid grip thanks to the metal framing. The camera bump on the back is slightly elevated from the base of the glass back part, but that makes the phone a bit wobbly. It is considered as that is the X factor of the phone. It gives the phone a very classy and eye-catching look. The metal framing is just the cherry on the top.

The display is an IPS LCD screen of recent times. The 5.2 inches full high definition IPS LCD screen has been a real gem in the market for the recent past years, and it is indeed a real treat for the users. The color sharpness ad the balance is right at the top end of the podium. This display has a resolution of 1080 pixels into 1920 pixels. That means you can view your videos in full HD. The screen to body ratio is about 68.4%, and the aspect ratio is the all-time standard 16:9.

From the dual-camera setup, which is on the rear part of the phone, the main camera is a 1.4 millimeter 12 Mega Pixel camera with an aperture of f/2.0. This main camera is equipped with a Dual Pixel PDAF sensor. The most exciting part is the second camera. The Second camera is not just any ordinary one. Rather it is an ultra-wide-angle camera with a viewing angle of 120 degrees. This 13 mm wide-angle sensor is of 8 MegaPixel camera. The second camera has an aperture of f/2.2. But there is no Autofocus feature up for grabs in this unit. The front-facing camera, all commonly known as the Selfie Camera, is pretty decent as well. The Selfie camera comes with a 1.0 millimeter 16 Mega Pixel camera with an aperture count of f/2.0.

The Moto X4 runs the big marathon on the chipset of Qualcomm Snapdragon 630. It is an excellent mid-range chipset that processes the tasks with a staggering Octa-Core power, which is clocked at almost 2.2 GHz Cortex A53. This chipset is pretty decent in class when it comes down to the power distribution and the performance boost. Motorola could have been smart and used the 650 instead of 630, but they chose the safest option to reduce the cost and not hurt the feelings of the common people.

However, 650 has an upper advantage on the Snapdragon 630 chipsets. Having said that, this phone is giving a solid punch and hepatic feedback with this Octa-Core devil. The Graphics Processing Unit, AKA, the GPU is of Adreno 508. It gives that extra push and necessary graphics sensitive support to the device to maximize the impact and smooth transitions.

This phone has three variants of RAM.

One is of 3 GB, and the other is of 4 GB. The highest version comes with the 6 GB variant. The internal storage has two options to choose from. One is 32 GB, and the latter is 64 GB.

The Battery is of 3000 mAh, which is a non-removable Lithium-Ion Battery. It comes with Motorola’s signature turbocharging feature for maximum speed in charging. The charging brick which is provided in the box is 15 Watts, which is the said turbocharger for this bad boy.

The fingerprint scanner is front mounted on the home button area or commonly known as the bottom chin, and the other sensors like accelerometer, proximity, gyro, and compass are included in the phone to give you an all-round sucker punch.

This phone has an IP 68 water resistance certification. That means this phone is water and dustproof. This is a new feature which is new to Motorola phones. So, you can jump inside the pool with this phone and click some cool underwater pictures.

So, this was the Moto X4 for you guys. Now let us see what the Moto G6 has to bring on the table. I am having a funny feeling that this fight is going to be epic!

The phone itself has been very sturdy as the Moto G6 is weighted around 167 grams. The front part, I mean, the screen is protected with Corning Gorilla Glass 3, and the frame is made out of high-grade aluminum. And the back part is made out of the glass as well with the identical protection of Gorilla Glass 3.

The dimension is 6.06 inches in length, 2.85 inches in width, and 0.33 inches in the breadth. As per as the dimensions are concerned, the phone is just about the perfect size as well. In daily usage, you won’t even notice the weight as it is almost an ideal phone as per the weight and measurements. But the margin of difference is pretty narrow with the Moto X4. So rest assured, we will be witnessing a neck to neck clash between the two Motos.

This phone also comes with the traditional IPS.

The 5.7 inches full high definition IPS LCS panel comes with a resolution of 1080 pixels into 1440 pixels. The aspect ratio is 18:9, the first real exception between the two phones so far. The screen to body ratio is almost close to 75.4% as far as the thick bottom bezel is into Play. Moto would have done justice if they opted to shrink the bottom bezel or just to hit the home run by choosing AMOLED. But by a small margin of error is always there between the two phones of today. The Aspect ratio has been pretty good in the Moto G6 than the ratio of Moto X4. But you won’t feel the difference if you use both of them. But putting the side of the phone by the side can show the slight difference,

Yes, they could have been shooting the stars with a 630, which is a slightly better performing Qualcomm chipset, but 450 is pretty smooth as well, considering the fact that the Moto G6 is, after all a budget series phone with a stiff price point.

This 14 nm chipset runs in eight core as you have guessed it. That means it is an Octa-Core processor. The processing power is clocked at 1.8 GHz Cortex-A 53. So it is a decent chipset with a fair amount of clock spend and processing power to spice up the endurance of the Moto G6. The GPU is Adreno 506 and does give a solid punch in the performance while exploiting buttery smooth transitions in graphics sensitive tasks.

This phone is also backed up with yet another 3000 mAh battery, which can be a real punch in all-day usage. But there are no reports of the involvement of the iconic turbocharging by Moto. However, this phone does support fast charging. The phone is equipped with 15 watts of the fast-charging power brick.

This phone is a budget range smartphone. So, the official IP rating is still the big fish we cannot swallow. But there is a ray of hope that Moto has been giving us ever since the launch of this phone. The phone has a water-repelling coating that can withstand some sudden splashes of water to some extent. But that does not and should not encourage you to jump inside the pool with this little dude unless you want to buy a new phone and bid farewell to this one.

End of the battle. Now it’s time for the results.

So, the similarities of Moto X4 and Moto G6:

The dissimilarities of Moto x4 and Moto G6:

Judging by the facts and the specs, I have come up with a decision. But I do have to tell you that the winning margin is very narrow, and the winner does deserve all the credits.

So, the winner is *drum rolls* The Moto X4! Thanks to the brilliant built quality and protection, also great charging capability and overall performance. So that was all for today folks, we will see each other again!

How to Message from Myself on iPhone

What are some great budget phone options of 2022?