Finally, Tecno Camon 15 and the bigger version, Tecno Camon 15 Pro has been launched. The two latest Tecno smartphones were officially launched on February 20, 2020, with quad rear camera setup at a budget price.

Tecno Camon 15 Pro comes with a 6.53 inches display that gives a screen resolution of 1080 x 2340 pixels. Thanks to the pop-up camera, the smartphone offers more than 86% screen to body ratio.

Tecno Camon 15 Pro is powered by a 2.35GHz octa-core MediaTek Helio P35 (MT6765) processor. It comes with 6GB of RAM and 128GB internal storage that can be expanded up to 250GB via microSD card. The Android smartphone runs the latest Android 10 OS based on HiOS. Camon 15 Pro derives its power from the 4000mah non-removable battery.

READ  Realme 5i Price in Pakistan

Tecno Camon 15 Pro price starts at $208 which is approximately NGN 76,000. It was launched in Ice Jadeite and Opal White colours. 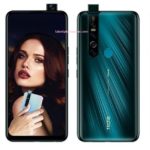 iTel Mobile has kicked off the year 2020 with a brand new budget smartphone series called the Vision series that...