An upcoming Oppo mid-range android smartphone believed to be the Oppo A31 with model number CPH2015 has been certified by Bluetooth SIG. According to reports gathered from Playfuldroid, the phone was previously rumored to be the Oppo Reno S, but the real name of the smartphone is now confirmed.

Remember the Oppo CPH2015 (Oppo Reno S) I talked about a little while ago? The same has now got the Bluetooth certification
Specifications: 2.0GHz Mediatek octa-core processor
6.517-inch HD+ screen
4230mAh battery
ColorOS 6.1.2 out of the box
India launch as well#oppo #OppoRenoS pic.twitter.com/e2BrP4YZin 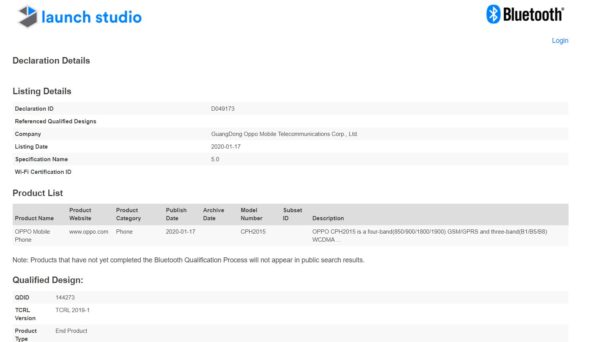 According to a report from Muku Sharma’s twitter page, the upcoming Oppo A31 will be armed with a 6.51-inch display, with FHD+ screen resolution. The device will be powered by an unspecified 2.0GHz octa-core SoC developed by MediaTek.

Additionally, the Oppo A31 mid-ranger is expected to run on ColorOS 6.1.2 based on Android 9 Pie out of the box. Fueling the device is a powerful 4,230mAh battery.

Given that the OPPO A31 had already received most of the compulsory certifications, it’s official launch should be imminent. It will certainly be another value-for-money smartphone targeted at the mid-ranger segment.

How To Watch Netflix With Friends

How to manage an all-in trade