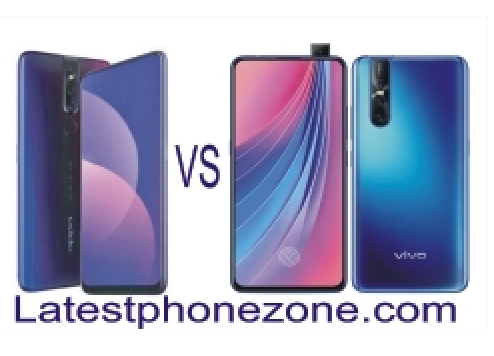 Today we are going to compare these two latest Android smartphones from top mobile phone makers, Vivo and Oppo. One is the Vivo V15 Pro and the other is Oppo F11 Pro. These two devices are both flagship devices for both companies with pop up selfie camera.

The Vivo V15 Android smartphone boasts of an AMOLED screen while Oppo F11 Pro comes with an LTPS IPS LCD which are quite good with the former being more battery conservative.

Both displays are what is expected from recent devices if they are to stack up strongly with other devices within their range.

The V15 Pro comes with blue color and stripes that are hardly noticeable unless one goes close. The selfie camera is not the conventional notch that we are used to at the top bezel. Rather, it is a pop-up, no wonder the smartphone is almost bezel-less at the top.

The top frame is just 2.22mm while the bottom is 1.75mm. It’s a comfortable phone in the hand and its design is almost flawless.

Now to the Oppo F11 Pro. Note at the time of writing this comparison, the device is not in the market yet but we’ve seen an official video released by the company. The device takes an almost bezel-less screen with no notch found anywhere on the screen.

Just like the V15 Pro, there is a pop-up selfie camera controlled by a slider located at the top of the display. Then just below the rear camera, there is a fingerprint scanner. The Oppo F11 Pro will come in 2 colors: Aurora Blue, and Thunder Green colors.

Looking at the chipsets and CPUs of both devices they are on par and falls within the mid-range category of smartphones.

Not the ideal gaming phones and not close to the performance of recent high-end Android smartphones like Samsung Galaxy S10 Plus or Nokia 9 PureView.

The Vivo V15 Pro Android smartphone comes with a triple camera at the rear. One camera has 1/2″ 48MP sensor, the other is an 8MP Ultra wide angle lens and a 5MP depth sensor camera.

This is as good as it could get, taking mobile photography to another level. The selfie camera is impressive too. Four pixels are placed side-by-side to produce wonderful images of yourself and friends.

camera at the center of the device, this camera serving the selfie purpose. Then at the rear, a 48MP + 5MP dual rear sensor camera capable of taking clear pictures, even in low light environment.

Vivo V15 Pro comes short considering the battery capacity when compared to Oppo F11 Pro. It has a battery capacity of 3700mAh to 4000mAh of the Oppo. Both batteries have lithium cells and are non-removable.  Just like most recent devices, they come with the fast charging feature.

The Vivo V15 Pro is estimated to cost $644 when it finally hits the market. It should be noted that the device is not yet in the market but should be available later this month (March).

The Oppo F11 Pro, when released this month, will go for $555.33 in the US. The price difference between both Android smartphones is not that much.

So what do you think? Which of them will you go for?

Why Are Video Testimonials Great Marketing Tools in 2021?

Make Your Husband Feel Appreciated With These 5 Helpful Tips