Infinix mobiles are making significant progress in the smartphone world. Before the year 2011, there were no Infinix in the market. In this article, you can know about Infinix Note 7 Specs, But the Hong Based Mobile manufacturing company emerged in the year 2013.

So why, Infinix? Why should we even consider buying a phone from Infinix? What is the unique selling point of this phone?

Let me break that for you. This is a pretty new brand in the market. But that doesn’t mean they lack behind. By the way, they have been producing some excellent and battle-tested smartphones, which have some advantage even on specific models of the already established companies. The second thing is, the phones are pretty cheap, considering the other competitors. So, when you have a tight budget but still want to have some meat under the table, then we would be more than satisfied to go for the Infinix phones.

On the other hand, the phone which we will be covering today is the Infinix Note 7. So there are some specs which have been updated by Infinix does give us a clear thought about the phone and its performance. So we will be discussing that as well.

There are some significant criteria that can categories the specs and features in a distinct manner. The classes are as follows:

So let us not waste any words and just dig into the specs real quick. First up, we will see the design of the phone. 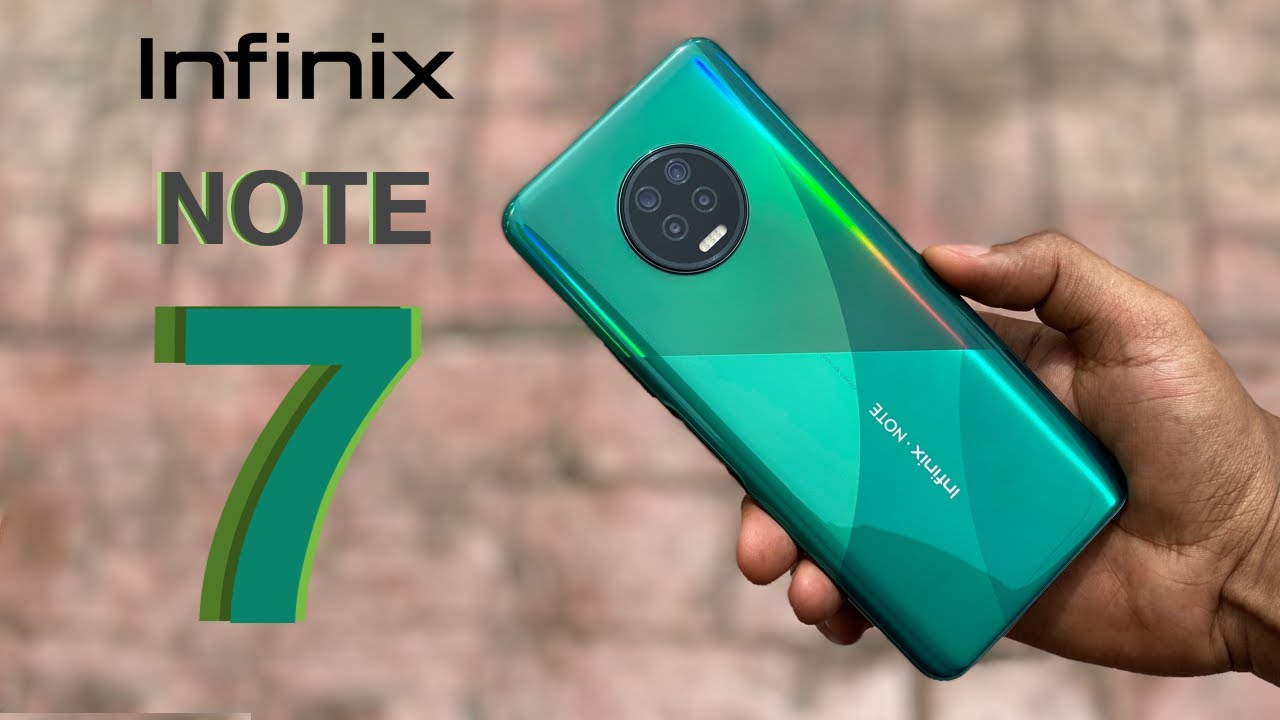 In addition, the phone has a promising design. It is equipped with what it seems like a polymer body. But the specifics are not yet revealed. But judging by the price point, this phone will be coming with a premium quality plastic build. The central concept of the design is pretty unique. The Quad camera set up in the rear camera module is pretty unique. The circular module in-houses the quad cameras the unique quad-LED Lights. On the front, which is apparently the screen is kind of blessed with the trendy hole-punch camera cut out.

Also, the colour of the body is yet another beautiful incarnation. The colour variants are available in three options. The first one is Forest Green. The second one is Aether Black, and the last one is Bolivia Blue.

In brief, the phone is pretty standard in the market. The length is almost 6.83 inches, and the width is nearly 3.11 inches. So, basically, the phone is definitely not a single-handed phone. It is a bit bigger than usual. But that is what the phone is supposed to be right! It has a ‘Note’ in the name, remember!

So, that was pretty much it for the design. I personally like the situation going on right now. Because the phone is indeed making some of the best brands feel a real complex about it. So that is good news for the phone and their manufacturer.

Now let us move on to the next segment, which is the display of the Infinix Note 7.

The Infinix Note 7 comes with an IPS LCD display. IPS LCD display is pretty standard judging by the market. But the USP is that the show has a punch hole cut out. The screen is a High definition display. That means it has a resolution of 720 into 1640 pixels. The PPI density is around 258 PPI.

The display seems to be a decent screen. But Infinix should have included a full high definition screen. If they managed to do so, then this will be a whole new ball game. But 720p display is also above the average now, especially for this price range. The cool aspect of this phone is the punch-hole display as the phone has not hit the market yet. We are not sure about the viewing experience. The screen to body ratio is almost 83.7%. So the screen is going to give a bezel-less feeling overall.

In short, the screen is going to be decent. The animation and the shifting of colour should complement the screen. Let us just hope for the best.

Now, we will be focusing perhaps the most awaited section of the phone, which is the performance of the Infinix Note 7.

The Software of Infinix Note 7

The software on the phone is going to be Android-based. As if you guys didn’t know that! Jokes apart, this phone will come with the latest Android Version 10. That means the phone will be having all the added features of the newest Android. This is excellent news for the phone or any other phone with a good screen. This version has some unique gesture control and hectic feedback in apps management.

By the way, the Unique thing about this phone is that the phone has a signature UI. This is known as XOS 6.0. Honestly speaking, I have used this UI before, and I have some good news and some bad news for you guys.

Also, let us focus on the goodies first. The UI is pretty simple, the app drawer is eventful, and the transition is pretty smooth as always.

But the saddening part is that the UI has some bugs related to some specific apps. For instance, the Camera app closes by itself when it is in use for a fair amount of time. The music app suddenly stops playing music. The video player does not have all the formats available. So, you will have to install another 3rd party app for playing videos of all forms.

But all these problems were in the previous versions. But as we have seen the progress done by far, Infinix is clearly on a mission. And I am pretty sure that they have already fixed these problems and bugs in the latest edition of the Operating System.

Now let us see what the hardware will offer the consumers.

The Hardware of Infinix Note 7

The Hardware of the phone is pretty off the usual track if someone asks me. The chipset is manufactured by Mediatek. The chipset of this phone is the Mediatek Helio G70. This is equivalent to the Mid-Range Snapdragon 700 series. This is an Octa-core Processor. The cores are clocked at 2.0 GHz for the first 2 Cortex-A 75 Cores, and the latter Cortex-A 55 are clocked at 1.7 GHz.

The graphics processing unit is Mali G52. So there is some meat under the hood.

As far as the RAM goes, it has a 4 GB variant and the 6 GB variant. The storage is 64 GB and the 128 GB option. There will be three combinations in the market; the baseline will be the 4 GB RAM and the 64 GB internal Storage, the medium line will be of 4 GB RAM but will have the higher 128 GB of internal storage. And for the last version, it will have the 6 GB RAM with the 128 GB storage.

As far as the specs of the hardware and the software are bragging, the phone will have a decent speed and performance benchmarks. But that will require Infinix to fire in all cylinders. A little here and there will ruin the game for the newcomer.

Now let us have a proper look in the camera unit. I must say the cameras are looking positive and will going to attract a lot of audiences. So the phone should have a decent camera.

The camera of Infinix Note 7

In addition, the selfie AKA the front-facing camera is 16 Mega Pixels. This is a 26 mm wide-angle camera which comes with an aperture count of f/2.0. The videography can be done at 1080p with a frame rate of 30 frames per second. The selfie camera does the same as well. But there are no further reports on the image stabilization during the videos.

So, honestly speaking, it is an unusual choice. Infinix should have inserted an 8 MegaPixel Ultra Wide instead of the 2 MegaPixel dedicated video camera. Or could have skipped the fourth camera altogether and set up, which might be a great triple camera setup of 48 Mega Pixels Main Cam, 8 Mega Pixels Ultra Wide and a 2 Mega Pixels depth. That would have been a winner. But this is still far more paces away from the market. The phone has not been launched yet. So, I cannot really tell the outcome. You never know, this new tech or formation can be the lucky charm for infinix. It is all about making things right.

Now let us move to the battery of the phone.

The battery of Infinix Note 7

In Comparision to others, the phone is going to offer something easier. Which will easily blow your mind Infinix Note 7 will have a staggering 5000 mAh battery. To charge this bad boy up, the phone will support an 18 Watts charger as well. But the major upset is that the phone will be equipped with an 18 Watts fast charging. So, you will have to make yourself happy with that. But ‘USB on the go’ will be of some advantage for sure.

The fingerprint sensor is in an unusual position. But I must say that it is going to be the Unique Selling Point. The fingerprint is ‘Side’ Mounted. The other sensors are the basics. Accelerometer, proximity, and the compass are the notable sensors. The phone will have gesture support as well, thanks to the latest Android version 10.

In conclusion, it is high time that you guys need to settle this in your mind. Making a phone water-resistant and also getting an IP rating can cost the manufacturers a whole lot of money. That means they will have to increase the price. But it is pretty much next to impossible for the mid or lower mid-budget range phones. And in this case, Infinix Note 7 is clearly not an exception.

Still not announced. This should be around 185 US Dollars marks. I think this is a suitable price for this decent device.

Yes, it has a fast charging of 18 Watts. But the port is the typical USB Type 2 Port.

So, that was the upcoming Infinix Note 7. Let me know about the thoughts of yours in the comments and will be seeing you all in the next article!

How does a cell phone jammer help you to make money?

How to Turn Off Screenshot Sound on Android