Samsung is one of the leading smartphone manufacturing brand in the globe. The worthy rival of Apple Inc. has been making smartphones for every type of customers. First, lie every other company, Samsung used to target the niche audience. This article you can know about Samsung Galaxy M51. The audience who would have no real problem in spending some extra money.

But, as the priorities changed, the world got vastly digitalized, people from all platforms started to feel the need for a smartphone in their everyday life. So, as once a luxury became a necessity. Now, the smartphone has become an everyday need for almost every generation and every field of expertise.

Samsung was quick to realize that. But it took a hell lot to react. Before Samsung entered the budget market, people were fulfilling their need with other brands. But having a trustworthy logo on the phones was the ultimate desire.

When the desire turned into a potential business, Samsung quickly launched onto it and announced the M series. This particular series of smartphones are designed to reduce the cost and make the user experience far more sophisticated and powerful. This phones came into life.

The wave was a big hit. Samsung had made an all-time best sales in the year 2019. This gave them a huge hope. Thus they started to launch the second generation of M series smartphones. These phones are really pushing it hard as they are packed with all the goodness of Samsung and the power of Exynos.

The Samsung M51 is said to be the newest addition to the M family. But the release dates are not yet confirmed. As you all know, the COVID-19 created a huge crisis in the world economy, and companies like Samsung are really thinking twice before making a viable move. But as of some trusted links, we are assured that the Samsung M51 is pretty much all set to hit the market real soon.

We have a list of the expected specs that is going to be the Samsung M51 specs. I can’t wait to share this with you guys. So, let us not waste any more time and start the discussion real quick.

We are going to discuss all the specs in a detailed and distinct manner. So the basic outcome will be much more sophisticated and understandable. The sections are:

So let us see what the design of the Samsung Galaxy M51 will look like. 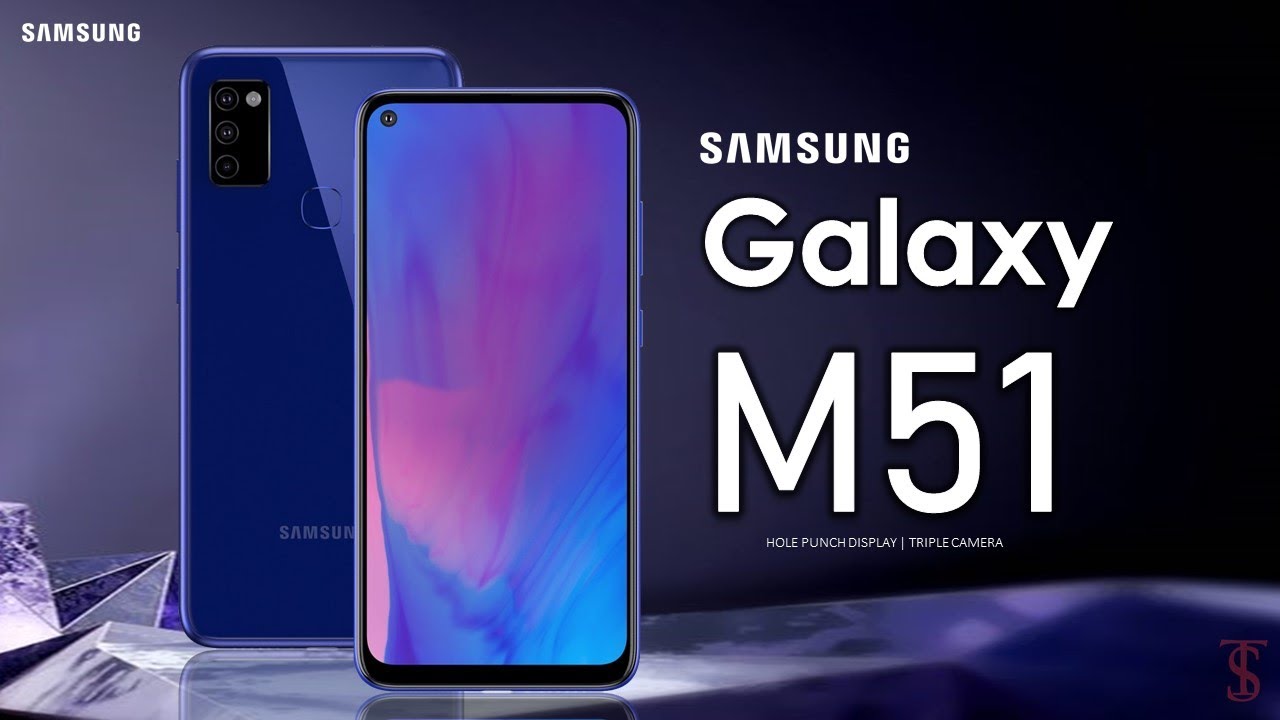 The Samsung Galaxy M51 is going to be the next phone in the M series. As we all know, the M series is the budget series of Samsung. So, it is more likely that the Samsung M51 is also getting the plastic build quality to lie its brothers.

So, the frame and the back is going to be plastic. The dimensions, however, is going to change fractionally. The length will be of 6.40 inches that means a shy taller than the M41. The width will be an unusual 3.05 inches. That indicates the phone is going to be a bit wider, which will create difficulty in single-hand operation. The phone will be 0.33 in breadth, which is pretty standard in the market so far.

The main change will be the screen orientation and the camera module. The screen will be a punch-hole display. This will certainly attract some crowd as the trendy Punch Hole is making a great impact on the viewing experience. The screen will have a Corning Gorilla Glass 3. That means it will have some protection from the dust and the scratches.

The camera module, however, is going to have a rectangular-shaped box. The camera is a triple camera setup equipped with a dual-LED flash. The Fingerprint sensor is on the rear surface. As for the attributes, the lock button and the volume button will be on the right side of the phone. The left side will have the SIM tray. The top will be equipped with the vital 3.5 mm headphone jack. The bottom portion will have the USB Type C port and the mono speaker grill.

So that will be the design as of now. The weight of the Samsung Galaxy M51 phone is not confirmed yet, nor do we have any viable sources with the required information. I am expecting the phone to be weighted around 160 grams to 180 grams.

Now let us focus on the screen. I should ward you that some of you are going to have a different opinion. But I will clear that out for you.

The Display of the Samsung Galaxy M51: The Punch Hole IPS?

Yes, you read it right! This phone is going to have a punch-hole display. But it will come with an IPS LCD. Let us go through the specs of the screen first, and then I will discuss why Samsung has opted not to use an AMOLED panel from their own background.

The Screen will be a 6.5 inches IPS LCD display panel. This screen is enormous and also has a full HD resolution. That means the phone has a resolution of 1080 into 2340 pixels. The aspect ratio is going to be 19:5:9, thanks to the punch hole camera module. The top and the side bezels are minimal, but this device has some visible screen, which is a good thing, to be honest. When you are watching something on the phone, the last thing which you are going to have is a broken screen by falling from the hand due to proper grip.

The screen to body ratio is almost close to 82.3 per cent. So the viewing experience will be pretty decent. This screen will have a PPI density of 396 PPI. The screen has a protection of Corning Gorilla Glass 3.

Now, coming back to the big question, why LCD over AMOLED? The reason is cost-efficiency. Yes, I admit the fact that Samsung makes the AMOLEDs, but still using the AMOLED panels will increase the price by a considerable margin. But the IPS Display is not bad either.

So that was the screen for the upcoming Samsung Galaxy M51. I hope you guys have got the motive behind an LCD screen rather than the AMOLED. Now let us see what the software and the hardware unit sum up and generate the performance of the phone.

Performance of the Samsung Galaxy M51: The Snapdragon?!

Yes, this time, Samsung is going for a Qualcomm chipset. This is probably why they have to drop the AMOLED and settle in with the IPS display. That is a smart move, Samsung. But that is completely my opinion. Now let us see what the software has to offer.

The Software Unit of the Samsung Galaxy M51

Now let us explore what is under the hood of this phone.

This time, Samsung has decided to go for the Snapdragon chipsets rather than their very own Exynos. Even the Snapdragon version is the brand new powerful yet budget-friendly chipset. The chipset which powers this phone is the Qualcomm Snapdragon 730. This Octa-core processor has a data channel of only 8 nm. That means it is far faster and efficient.

This Octa-Core chipset is clocked at a speed of 2.2 GHz for a couple of Kryo 470 Gold. The latter 6 Kryo 470 Silver cores are clocked at 1.8 GHz. The graphics processing unit AKA GPU is of Adreno 618.

The RAM is going to be available in two variants. The base model will have 6 GB of RAM. And the high-end version is going to have an 8 GB RAM. The storage is going to be of 128 GB. But there will be an SD Card Slot. So people who are in need of more storage can easily expand by using external Micro SD Card.

The Software has all the necessary prerequisite to complement the hardware unit to the fullest. The Snapdragon 730 is indeed a huge improvement. But I am not entirely sure about the performance being a real winner until it falls on the hands of the people.

Now let us see what the cameras are made of.

Cameras of the Samsung Galaxy A51: The Triple Camera Setup!

The camera hardware does look promising. Now we will have to wait for the phone to hit the market so that we can have a detailed review of it. As far as the videography is concerned, the rear camera can record up to 4k resolution at the frame rate of 30 frames per second. And from the selfie camera, we can shoot some good quality videos at a 1080p resolution with a frame rate of 30 frames per second. But this time I am pretty sure that there will be no stabilization for the front-facing camera.

Now let us see what the battery unit has to offer. I do remind you that the decision of skipping an AMOLED display does save a whole lot of energy.

The phone comes with a 4000 mAh battery with a 15 watts fast charging capability. Samsung has been equipped with a smart power-saving method. So you can easily exceed a one day mark despite some heavy usage.

This phone, like the other M Series phone, will not come with IP certification. Making the phone waterproof is going to be a tough job, and it will also increase the price. So there is no water resistance.

No, it has a standard 15 Watts charging capability.

The phone is still upcoming, so the pricing is still unclear. But the amount should be around 190 Euros to 220 Euros.

Samsung does push the phones in the market with a bang. This phone is going to be the same hit in sales as the brothers of the phones are. So that was all for today folks. Will write about the review as long as I get it. Till then, Stay safe!

How to Message from Myself on iPhone

What are some great budget phone options of 2022?