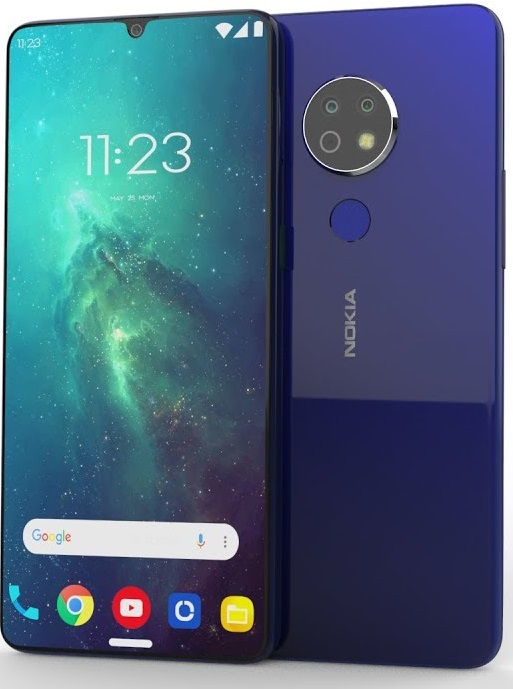 For a few days now, the internet has been on fire with the news of Nokia upcoming Android smartphone, Nokia 7.2 also known as Nokia Daredevil. You will find the official full specifications, reviews, and the current price of Nokia 7.2 (Daredevil) in Nigeria in this post.

According to reports from very reliable sources, Nokia 7.2 will come with a 48MP round camera at the back, giving you a device with which you can take very clear pictures to share with your family and friends on social networking platforms.

With a MicroSD card support for up to 400GB, Nokia Daredevil aka Nokia 7.2, is just the right Android smartphone to get for yourself or your loved ones.

According to our sources, the smartphone will be coming with nothing less than a display size of 6.3-inch with Full HD+ resolution and about 19:9 aspect ratio.

It may be powered by Snapdragon 660 processor or the latest Snapdragon 710/712 chipset.

While we are waiting and expecting the official announcement and release of the smartphone into markets on the 5th of September (two weeks from now), here is what to expect from the device.

Looking at Nokia 7.2, you will likely see a smartphone that is better looking than anything the company Nokia has ever produced. The device will definitely be featuring a high screen to body ratio of about 81% (18.7:9) with nothing less than a display size of 6.3-inch with Full 2340 x 1080 resolution.

The smartphone may be available in 3 colors: Ice Blue, Charcoal Black, and Forest Green.

However, all the colors may not be available everywhere for the first few months of its release.

As for taking pictures, you can rely on Nokia 7.2 to be able to deliver astonishing photographs that you can easily upload on your social media accounts without the need for editing.

At the rear, the smartphone is equipped with a triple round camera setup (Zeiss Optics), containing a 48MP, 5MP, and 2MP sensors with 120-degree wide-angle photography and OZO Audio Capture. This is also the kind of camera setup seen on Nokia 9 PureView. The only difference is that the Nokia features more sensors (5 cameras at the rear). On the front, you get a 16MP shooter for selfies.

Talking about the battery, the device is equipped with a 3500mAh integrated battery, enough to handle a day’s usage. The best thing about the battery is its Qualcomm Quick Charge, so you don’t have to wait endlessly for it to charge. All you need is to just plug it and in minutes your battery will be fully charged.

Going over to the hardware available on the smartphone, the Nokia 7.2 has the latest Snapdragon 710/712 chipset. It will really be a disappointment if it comes with anything less than that.

Adding to that, the smartphone will be coming with a 4GB RAM for apps installation and multi-tasking. It will also feature a 64GB storage space for your files. The higher variant of the device is expected to come with a 6GB RAM and a 128GB ROM for storage. You can also expand this up to 400GB using a MicroSD card.

Talking about the Operating System, Nokia 7.2 will be running on the latest OS which is Android Pie.

Nokia 7.2 supports dual-sim. A normal sim card slot and a hybrid sim card slot (where you can either insert a memory card or a sim) are available on the smartphone.

The device supports LTE and features WiFi and Bluetooth 5.0. It also supports fingerprint.

Once the smartphone is released, you can get it on Jumia, Konga and smartphone stores around you in Nigeria.

The History of Valves and, how they work

Raid Shadow Legends For Pc – How To Install?

How you can use the smartphone for studying?

3 areas to focus on for optimised warehouse efficiency

Why does Bitcoin Carry a Value?