Samsung is firing in all cylinders as they have been cruising the market with their M series and A series phones. Samsung Galaxy M41 phones are filling up the gap of the lower budget and mid-budget phones. The central concept of these two ranges is to provide the desired brand name and the required performance to the commoners.

Previously, Samsung was solely concentrating on the G Series, J Series, and the flagship S Series. But they quickly figured it out that they are missing quite a big chunk from the market. So, they gathered their thoughts and started the M series. Later on, it went to be a big hit considering that they were highly competitive in the price, and they also offered decent specs.

The 1st phase was a pure heart warmer. Now, Samsung has been running here and there with its 2nd phase, experimenting with some of the oddest combinations. Their upcoming phone is the Samsung Galaxy M41. This phone is promising something great, which will surely catch some attention.

We will be going to have a closer look at the specs and extract some vital information that can produce a rough idea about the phone.

So, let us dig into the spec list and see what the phone is made of. 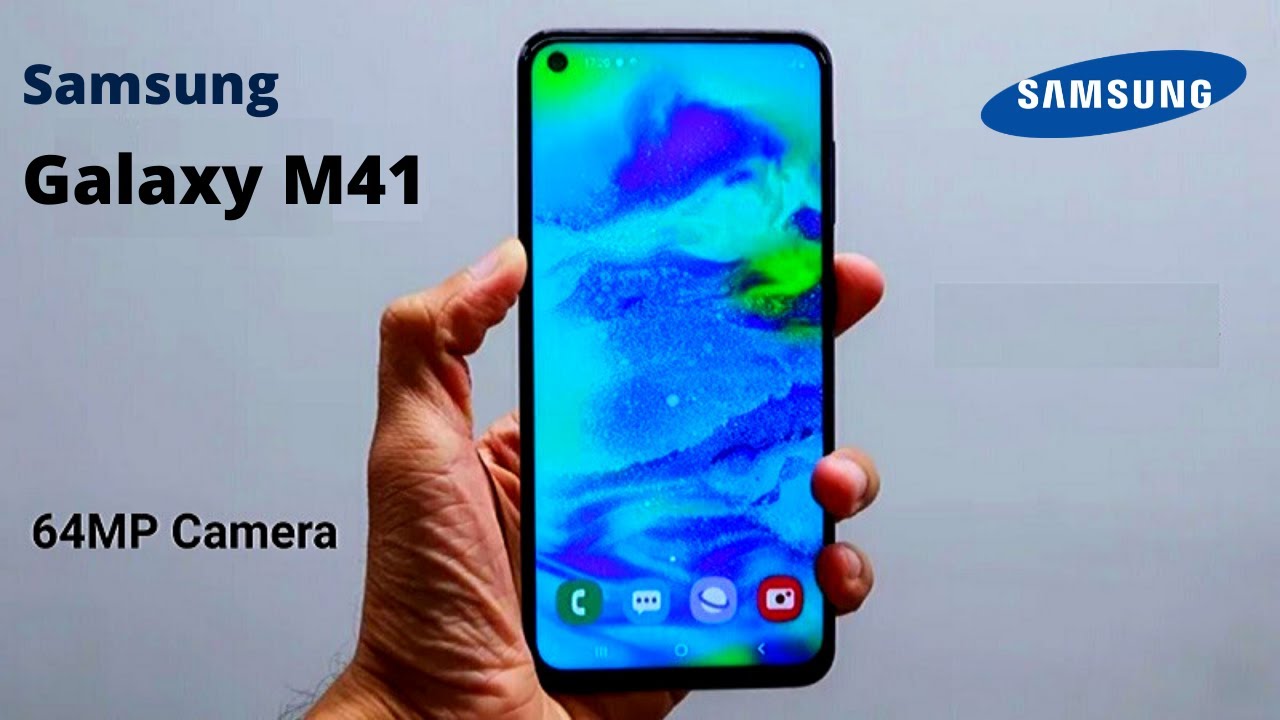 Suppose you have seen an M Series phones recently. Then you are probably familiar with the plastic built of the phones. These are mainly oriented as the said way just to reduce the cost of manufacturing. Mid-range phones are produced in a tight budget. Such special features like a better build material, water resistance, better glass protections, and more are cut down to maintain the steady cash flow. On the other hand, the phones save the pennies, which are used in more ‘important’ sectors lie cameras, processors, and RAMs.

Having said that, this phone will not be an exception as well. This phone will also have the same plastic back and frames. But this time, I am very sorry that we could not extract any further details about the dimension of the phone.

From the past experience and as far the display size are into account, I can make an assumption of the dimension. The length of the phone is going to be in the 6.5 to 6.6 inches range as the screen is 6.3 inches. The width will be around 2.85 or 3 inches judging the competitors and the previous models of the M Series. The breadth will be 0.33 or 0.35 inches.

Now, the attributes are going to be typically the same as the previous M Series phones. So, on the right side, we will have the power button and the volume adjustment button. The bottom portion will have the speaker grills and the USB type C port. The top part will have the all-important 3.5 mm headphone jack and a secondary noise cancellation microphone.

So as you can see, the basic design will be the same, but there are going to be some notable differences in the display and the position of the fingerprint sensor. The Samsung Galaxy M41 will have an in-display fingerprint sensor followed by the punch-hole display.

The design is going to attract some audience for the popular display inlay. But the main attraction of the phone is yet to come. Talking about the display, let us discuss it in the next segment.

Display of Samsung M41: The OLED?

Yes, you have read it right; finally, the mania of providing IPS LCD in budget phones is eventually long gone. But I am a bit surprised that Samsung has chosen an OLED rather than their in-house AMOLED. That is a mystery I cannot solve at this moment.

One of the reasons for skipping the AMOLEDs is the cost ratio. OLED costs much lesser than it. So, that might be the possible case, and I don’t really know. But the things which I know are the specs of this display.

This phone comes with a 6.3 inches OLED display, which is apparently full high definition. That means it will have a resolution of 1080 into 2340 pixels. The main focus is the signature punch hole cut out for the front-facing camera. That is somewhat attractive to a brand of people who thinks that this might be the new style statement.

We are now moving on to the technical part. The aspect ratio is going to be 19:5:9 thanks to the thin bezels and the punch cut out. But we are still unaware of the screen to body ratio because we don’t have the exact numbers of the dimensions.

But the pixel density is on the decent category, scoring around 409 pixels per inch. Because it is an OLED, it will be pretty bright, and the colours will be vivid. OLED has an excellent power efficiency rate. For that, it is able to save much more energy on daily usage.

This screen is going to be a decent screen. I have the feeling that it will give fierce competition in the market. Now, let us see what the performance section has to offer.

Performance of the Samsung Galaxy M41

Samsung Galaxy M series are budget-friendly yet powerful. Thanks to the considerable cost reduction in the chipsets. And the costing goes more and moreover the mountain as we go higher in performance and speed. But now, Samsung is producing chipsets by themselves. The Exynos chipsets are one of their proud creations.

Now, think of this in the following way. If you know how to cook good food, then cooking and having it in your own kitchen. But if you go to a restaurant, have the same food, it will cost you much more than the home food. Samsung has figured out the math way long ago, but they did not have the right series where they can install their own chipsets.

But then they decided to go for the M series. The M series smartphones are powered by the Exynos Processors. This particular model, the Samsung Galaxy M41, comes with an Exynos (Octa-Core Chipset. This Octa-Core processor is clocked at 2.3 GHz for the first four Cortex-A 73 cores. The Graphics Processing Unit is the Mali G71 MP3.

The RAM of this phone will be of 6 GB, and the internal storage will be available in 64 GB and 128 GB. The chief added feature of the storage unit is that it is expandable up to 512 GB VIA, the dedicated Micro SD Card Slot. So, people who tend to include all their files and data in their phones can easily use a Micro SD Card.

The speakers are what is seems mono loudspeakers. So, they will not be that clear and loud. But it will be in decent shape. But you will feel a lesser bass and difficulty in clarity. The earpiece is going to be the typical Samsung, loud and clear.

This phone runs in Android, we all know. But this phone might come with an Android PIE. By far, the rumour says that. But it would be best if we can upgrade that later in the time being. An Android Version 10 is a sheer win, but time will reveal that. The UI will be the signature One UI as well. This One UI is pretty much stock, but it can boost the phone with some extra loaded features and apps which can help the phone upscale the performance.

Overall the performance is not going to be bad after all. The chipset is co0mared with the Snapdragon 730G or 720 chipsets. It is a great mid-budget range chipset. 6 GB RAM is a good choice prior to the current market and consumption rates. On the other hand, ONE UI and Android 9 (PIE) is going to add some extra heights.

I expect this phone to be a decent mid-ranger. But there are more sections coming up next that might upscale my expectations or ruin them into ashes. We don’t know yet. So let us move on to the next segment. The next segment is the cameras of Samsung Galaxy M41.

The upcoming Samsung Galaxy A41 is all set to have a triple rear camera setup. The main camera of the triple camera module will be a 64 Mega Pixels Camera. I assume that this is going to be a 26 mm wide-angle camera. Though we are not exactly sure about the aperture count, still form the previous experience, we can expect this phone to have an aperture count of f/1.8.

The second camera will be a 16 Mega Pixels wide-angle camera. It also might come with a 16 mm wide sensor. The aperture count will be of f/2.0.

The selfie camera or the front-facing camera sits in the tiny punch hole cut out. This camera is alleged to be of 24 Mega Pixels wide camera. This camera might have a 26 mm sensor, and the aperture count might be of f/2.0.

Now let us see the most awaiting segment, which is going to be this phone’s USP or the Unique Selling Point. Yes, we are talking about the battery of the Samsung Galaxy M41.

The battery of the Samsung Galaxy M41: The Whooping 6800 mAh Battery!

Yes, no need to rub your eyes, your eyesight is just fine. I am not high on drugs as well, my friend! This phone is going to offer a staggering 6800 mAh battery. And to charge this bad boy up, we will have a 30 Watts fast charging facility. Rumours are spreading like this that the phone is going to last for six days! But we will see once it is in the stores.

To cut down the costs, this phone has no IP rating. That means this phone is not waterproof.

So, that was the upcoming Samsung Galaxy M41. Do let me know your thought in the comment section. Be safe; stay inside. And was your damn hands!

Infinix mobiles are making significant progress in the smartphone world. Before the year 2011, there were no Infinix in the...