Realme has become a favourite name in the smartphone industry. This brand has all the potential to become the next Xiaomi of the smartphone platform. As all the companies are launching phones after phones, it is hard to keep track of the progress and who is bringing which. But this particular product has caught my eye. The brand new Realme 6i. This phone was launched just days before the lockdown for the COVID 19 pandemic. But little did we know that this phone is going to catch some eyes.

The release date was the 29th of March, 2020. This phone has a price tag of 189.99 US dollars in the US Markets. Let us see what this phone has to offer at this price point. We will also be judging if the phone is worth the hype or not. So now, let us move on to the review.

Realme 6i Review: The Cool and Sleek Phone!

We all are aware of the phones that Realme produces. Fun fact, Realme is a sister brand of Oppo and Vivo. So, they do share the same blood. The brand new Realme 6i is looking pretty promising so far. But it will not be wise if I make a decision about the phone just yet. I will be going through the specs of the phone and also test the phone on a random basis. The criteria on which I will be reviewing this bad boy will generate an overall thought of the phone and its capacity. The criteria are:

Now let us move on to the first segment, whi9ch is the design of the Realme 6i.

Design of Realme 6i: Fun and Sleek! 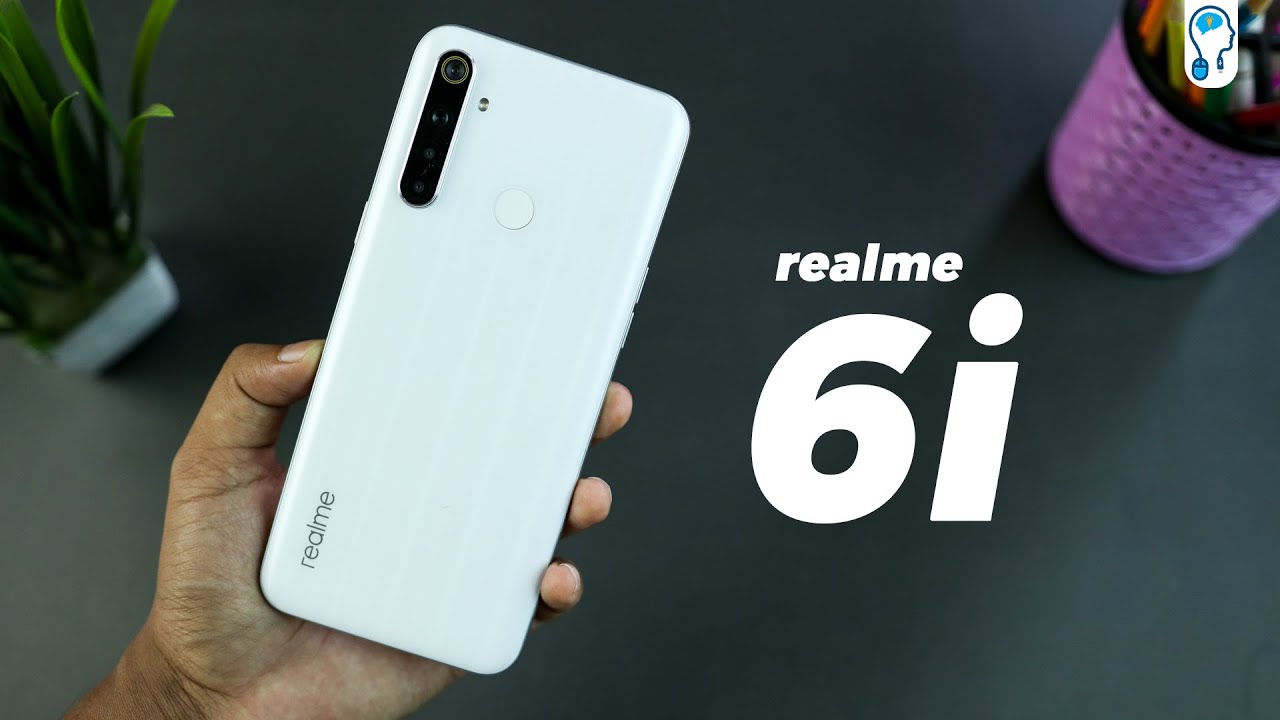 When I had the review unit in my hand, a smile came on my face. The phone is a cute one, indeed, and the colour combination looks gorgeous. The metal or glass-like glossy finish on the back does give the phone a premium look for sure. The phone is available in three colour variants. The first one is the Milk White. The second one is the same as our review nit; Green Tea.

And last but not least, Blue Soda. The production team does seem to be on a vigorous diet or something. No wonder the colour names are like these!

Jokes apart, this phone has a metal or glass lie finish on the back. But hold it right there, folks! This is not glass or metal. This is plastic. The phone has a plastic frame, a plastic back, and the glass front is the screen. You can’t expect a phone under the 200 bucks mark to have a premium glass or metal body.

Speaking of the body, let us go through the dimensions real quick. The phone has a length of 6.97 inches. This is pretty much the standard nowadays. The width is almost close to 3 inches; 2.97 inches to be exact. Clearly, it seems that this phone is not for a single hande3d user. The breadth or thickness of the phone is a standard 0.35 inches. The phone is a bit on the heavier side; it is weighted around 199 grams.

That was about everything in the design sector. Honestly speaking, we see an acute and effective phone. We have to bear this in mind that the phone is a mid-ranger. So, we cannot expect anything fancy. But, overall, the design is great. Now let us move on to the next segment. That is the display of the Realme 6i.

Display of the Realme 6i: The IPS LCD in HD!

This phone comes with a decent screen. The 6.5 inches screen has an IPS LCD panel. The IPS LCD Screen is a high definition screen. That means the screen has a resolution of 720 intros 1600 pixels. The screen has great colours and brightness. The aspect ratio is 20:9. This screen has thin bezels and thin chins all around. The notch is a typical teardrop notch. Thus the screen to body ratio is 82.9 per cent.

The screen has additional protection from the Corning Gorilla Glass 3. So, the screen is a type 3 scratch and dustproof.

Overall the colours and the brightness are decent. It worked just fine even in the bright sunlight. But there are some issues regarding the screen.

Speaking of issues, I have some objections. First of all, I get the fact that this phone is going to be a budget-friendly phone. So, it had to drop the idea of installing an AMOLED display. But I don’t see any proper reason for not installing a full High Definition IPS LCD panel. This had to be done where almost all the competitors in a similar price range are offering full high definition screens; some are offering AMOLEDs as well.

Overall, despite the downgraded resolution, the screen is yet a decent one. So, people who don’t really care about the screen resolution will not have any problem with this particular smartphone.

Now, let us move on to the nest phase. The next segment is my favourite one, of course. The segment is the performance of the Realme 6i.

Performance of the Realme 6i: The Helio Chipset and More!

The hardware of the Realme 6i

But there is a dedicated Micro SD Card slot. So, if someone needs more storage support, he can easily add more by inserting an external Micro SD Card.

Some people will scratch their heads, even will get in two minds about the chipset of this phone. But if I have to compare this chipset with the Qualcomm Snapdr4agon version, then I will surely compare this with the mid-range kings, the Snapdragon 700 series, Clearly, the Helio G 80 is a decent chipset for the mid-range smartphone.

Talking about the decency, this phone has been provided with a decent hardware and software unit. That means the phone has a decent performance as well. Yes, I am moderately satisfied with the performance of the smartphone. I do have pushed it to the limits. But without some minor lags and glitches, this phone worked okay. But there was a heating issue after some intense gami9ng sessions.

Now let us go through the cameras of the Realme 6i.

The camera of the Realme 6i

The rear camera is a quad camera setup. That means it has a set of 4 cameras on the back. I think, nowadays, it has become a trend to install a 48 Mega Pixel camera as the main sensors. On the contrary, it is not about the Mega Pixels; it is all about how well your phone responds to the provided hardware.

The cameras are decent, so as the photos. The photos are sharp and crisp in daylight. But the quality deteriorates when the lights dim out. The night mode does nothing much. The videography of the phone is supported up to 1080p in a frame rate of 30 frames per second. It is gyro-EIS available for additional image stabilization.

On the other hand, the front-facing camera, AKA the selfie camera is capable of recording at a resolution of 1080p in a frame rate of 30 frames per second.

Now let us talk about the battery of Realme 6i.

This phone comes with a staggering 5000 mAh battery. It is a lithium-Ion non-removable battery. To charge this devil up, this phone supports and 18 Watts fast charging. The USB Type C port also supports reverse charging, so you can share some juice with your friends from that very device. Cool, isn’t it?

Now let us see the sensors and other features that come with the Realme 6i.

The fingerprint scanner is rear-mounted and is in a perfect place. The other sensors, like accelerometer, gyro, proximity, and compass, are included and are in full working condition.

Nope. Not in a mid-ranger lie the Realme 6i.

FAQs of Realme 6i

No, it is not waterproof.

No, it has no wireless charging.

This phone is a pretty decent phone. But there are some shortcomings. But if you are okay with a phone that is pretty fast and good looking, then I would recommend the Realme 6i for you. That was all for today. Good Bye!

Samsung is firing in all cylinders as they have been cruising the market with their M series and A series...