Home Mobile One Plus Z Specs

Before getting on to something with this topic, let us first see the statistics first. Today, the world is Android oriented. Almost 80% of smartphone consumers are Android users. In this article, you can know about One Plus Z Specs. So, we can clearly see what the Android impact plays in your lives.

Let us go a little further deep inside the stats again. The form that 80 percent of the consumers, almost 85 percent of the users, are potentially mid or low-income participant6s. That means they have stetted themselves with low or mid-budget smartphones. In India, the Android consumers are almost 90 percent, and from that, almost 83 percent of users are using phones, which costs under the 300 USD price point.

Now let us shift the focus to a very familiar company of ours, the One Plus. One Plus has been the self-proclaimed flagship killers. They are well known for their flagship-like specs smartphones at a comparatively less price point. But in the recent couple of years, their smartphones have evolved, and now they are producing the full-fledged flagships. Funny, isn’t it?  You try to be the hunter, and now you are the bloody prey. But that is a good thigh, though. It reflects the progress of you as a company, as a force to reckon with.

still, there is a large amount of market left untouched by One Plus, where they have the potential to rule. Yes, I am talking about the budget range market. As I have mentioned earlier, One Plus phones have been targeting the flagship range. So, they are bound to make flagship-like phones with flagship-like performance. But getting this kind of specs is not cheap. So, they are usually priced at around 700 to 900 bucks. But still, this particular price point is out of the reach of the majority of the customers.

But the market is solely dependent on the budget phones. Where Chinese brands operate. Even the Tech Giant, like Samsung, has acknowledged the market state and has been launching its own budget range over the years. But still many of the phones are hit and miss in many sectors.

One Plus has been saying that they did not find the perfect tech just yet for their smartphones so that they can be within the budget. But guess what, the wait is finally over! After Qualcomm launched the all-new 700 series edition with 5G, One Plus quickly snatched the opportunity to officially enter the budget market. There has been a trusted rumor that the company is willing to launch a new line of phones which will support our pockets.

Such a phone is alleged to be the upcoming One Plus Nord and One Plus Z. One plus Nord has been the elder son of the budget series. Prices are a bit higher. On the other hand, One Plus Z has been rumored to be the slight downgrade of the Nord.

But having said that, the phone will be a real treat, and it will justify the lust of One Plus to get the best performance in the smartphone world. Now, I would like you to share the tentative specs and the features this phone will have.

Before getting into some of the specs of a particular smartphone, I love to go through in a detailed and distinct manner. So the categories which I am going to follow are mentioned below:

Before moving on to the next segment, we will have to bear that in mind that this phone is still upcoming. So the specs which we have may not be the same in the final release as the companies tend to tease in with various prototypes. Also, rumors are not always true.

So moving forward, we will be focusing on the design first.

Design of One Plus Z 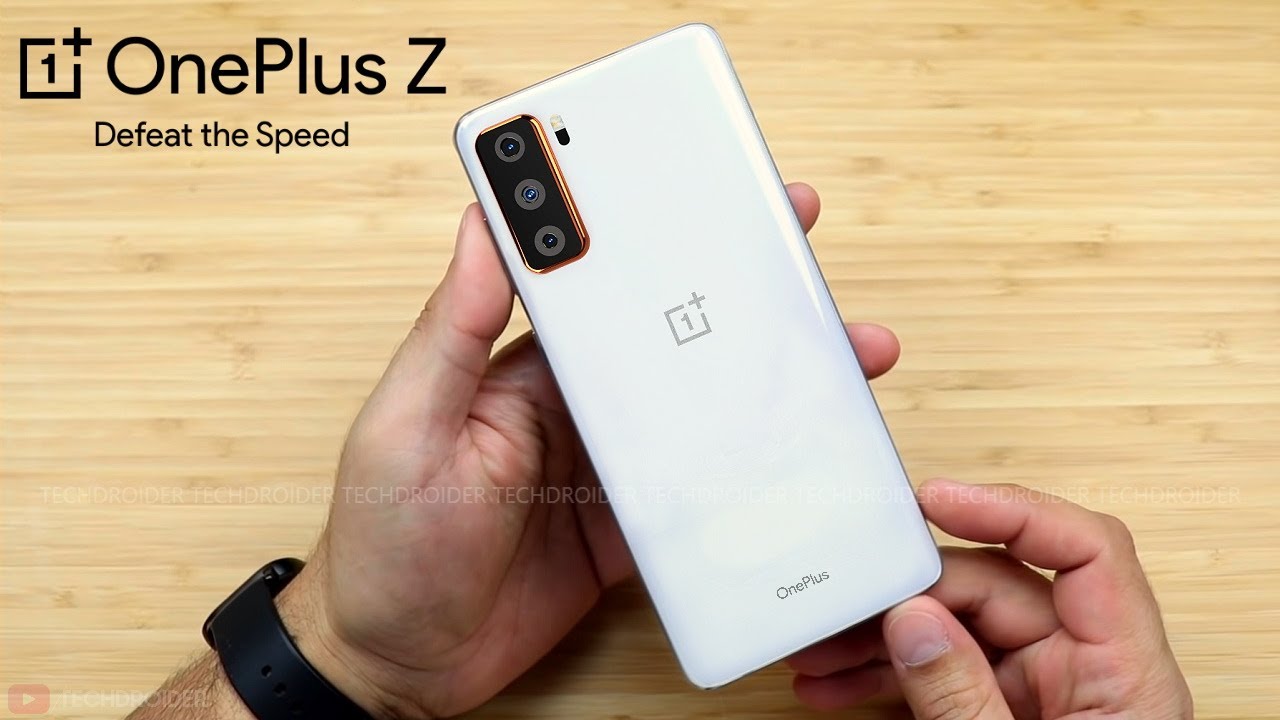 In a recent interview with the celebrated tech reviewer, Marques Brownie AKA MKBHD, Steve from One Plus has shared a number of prototypes where he showed the different design options which were eventually pitched by the product development unit in the One Plus pit. But as we know, One Plus phones have a distinct way of expressing their phones—tilted and rounded edges.

The vertical camera units all merge up as the identity of the One Plus Z Specs Devices. So, despite being pitched with several design options, One Plus has been pretty happy with the more traditional design. So we will still have the rounded and tilted edges for better grip, the same old camera module, and the punch-hole display as well. But unfortunately, we were unable to get any type of data about the correct dimensions whatsoever. But the main aspects are going to be pretty similar to the previous standard phones of One Plus.

However, this phone will have some major changes or compromises I would rather say. Because as we know, the One Plus Z is indeed going to be a budget phone. Then there will be some compromises and let go’s, which will eventually be omitted.

But never the less, the design will be pretty similar to the One Plus Nord. But the main change will be that this phone will come with a singular selfie or the front-facing camera rather than one. Another change will be in the rear camera as well that it will go for a triple camera setup. But the Nord has a quad-camera setup; or will have actually. Ah! I can’t bear the pain of waiting!

Now let us have a quick discussion about the display of the One Plus Z.

Display of One Plus Z

There was a certain portion of the interview with the One Plus guy in the MKBHD channel that One Plus was thinking of to let go of the AMOLEDs for this particular smartphone range to reduce the cost. I must remind you that the AMOLED screen almost costs double than the LCDs or triple than TFTs. So that is a huge cost factor. But other phones like Samsung is giving the AMOLEDs even in their lower mid-budget range smartphones.

So to speak, we are pretty sure that One Plus will stick to the trendy and smart fluid AMOLEDs with a full HD resolution of 1080 into 2400 pixels. There is a rumor that this phone will also have a higher refresh rate of 90 Hz. A 90 Hz display with full high definition viewing experience and on the top, a bloody AMOLED display. This phone is already a winner!

Performance of One Plus Z

The newest budget range chipset, but the flagship-like performance of Qualcomm, is going to be the inaugurating chipset for One Plus to enter the new market. Yes, you heard it right, a flagship-like experience that suits your pocket. The chipset which I am talking about is the Qualcomm Snapdragon 765 5G.

But why is this chipset provides the flagship-like experience? Because it has is a 7 nm Octa-Core Processor with a clock speed of 2.4 GHz. So it is pretty fast and may surpass some of the flagships in the market as well.

The RAM should settle in the sweet spot of 6 GB. Because 4 GB RAM is ancient history, and 8 GB is a kind of flagship-grade, which is usually out of the price point. The storage might be of 128 GB as far as the market is concerned.

One Plus phones are pretty much right on point when it comes to the user interface. Oxygen OS is one of the most sophisticated OS in the industry so far. So like it or not, this phone comes with all the awesome features that any other phones might not offer. On the other hand, the latest Android Version 10 is being the best in class for the Android world.

Overall the phone will be loaded with sheer power and performance benchmarks. The main concern, however, is the chipset not battle-tested yet. So how will the chipset perform is still unknown to the users. So it will be tough to compare it with another device prior to its launch.

READ  8 Common Phone Repair Mistakes and How to Avoid Them

Now let us talk about how the cameras might turn out and what are the key aspects of it.

Cameras of One Plus Z

So, here we are with the cameras. The cameras are going to be a key factor for a smartphone prior to its launch. The state of the camera, display, and performance can predict the phone’s fortune nowadays. Talking about fortune, One Plus Z has been pretty lucky with the specs so far. Some would say that the phone was getting too much attention prior to the launch. But this is One Plus, guys! It deserves attention!

So the cameras are looking pretty solid, and it will be capable of taking some amazing shots. It will also take some of the finest videos that mid-rangers usually take.

Now let us talk about the battery and the power management real quick.

The battery of One Plus Z

The battery is an identical battery of 4300 mAh non-removable battery just like the One Plus Nord. But the charging will be a bit slower than the brother. But the main tech is pretty standard and has been a huge support in power management. So rest assured, this phone will easily give you a good round the clock battery life.

This phone is, after all a mid-budget range phone. So, expecting a water resistance in this price point is absurd. But on the other hand, One Plus has been declining water-resistance all its career. The reason behind doing this is to reduce the cost. This core principle can be a contrasting one with the leading brands. But nevertheless, I kind of get the idea of leaving the water-resistance behind.

What are The Similarities with Nord?

There are many segments where the Nord and the Z are pretty similar, in fact, identical. Some of us have already thought that the phone is the same one, just with different names.

So Why Z and Nord?

So these are some of the differences that people tend to miss and confuse that the Nord and the Z are actually the same phones. But the matter of fact, they are not. They do share a pretty similar price point.

So, that was all for today. Let us just hope that the final release will rock the market and people will enjoy the best of One Plus in a budget that is going to win hearts. Thanks for joining and stay safe!